Neither do I.  Steven keeps saying, “apple, tree” whenever he sees evidence of a hereditary hoarding pattern. And since we’ve been living here for a month, he’s had many opportunities to say it.

Here are some of the things my parents hold onto:

A ziploc baggie of rubber bands.

Usually, the rubber bands turn up in all corners of the apartment, so I guess my mom finally corralled them into one spot — either to make them accessible, or to contain their eggs. You think rubber bands don’t lay eggs? Then please explain how they multiply and spread all over the house.

My mom saves them from Hale ‘n’ Hearty and stashes them in the bread box, where they fall into the crack of the bottom-hinged door and get crushed into crumbs.

Many two-bite portions of leftover salad in deli containers.

If it weren’t fermenting, I could see the wisdom in this. You never know when you’ll want just a bite of something. I’ve kept one little plastic-wrapped bite of brownie in the fridge for weeks, just waiting for the moment when I must have one bite of brownie.

Up to two weeks of newspapers.

Do not mess with my Dad’s New York Times or his Jewish Week. He likes to catch up on  old news while eating his “Zabars Cream of Musshroom (No Cream)” soup. If anyone would like to read a reform rabbi’s predictions of the no-longer-upcoming presidential election, we have that issue.

Stuff from our childhood.

I keep thinking I’ll help them get rid of stuff — like my sister’s doodles from 7th grade math class or my high school English papers — but then I look through it and can’t throw it out, either.

That includes my button collection from the early ’80s.

It’s in a dusty Bennetton bag, taking up prime real estate in my bedroom closet. Which, I’ll add, was stuffed until recently with my sister’s chunky platform shoes from the 90s, and still houses a hanging accessories organizer packed with scrunchies and Kieth-Haring-esque earrings. (I might have to take responsibility for those.)

My first thought when I came across the button collection was, “Do we really need to hang on to this? I need more room for sweaters.” And then I pulled it out of the bag.

Steven said, “bet some of those are worth money.” The magic words that keep me from getting rid of anything. And if that doesn’t do it, there’s the nostalgia. And/or “I might need this at some point.” (Apple, tree.)

All the buttons are exactly as I had them arranged, fastened to a piece of maroon velour. My mom helped me search every fabric and trimmings store in town for that maroon velour. No other cloth would do. I must have seen something like it in one of my teenage cousins’ psychedelic lairs. Or maybe in the Ricker’s room on “Silver Spoons.”

As you’ll see as we walk through these buttons, the fabric was the only thing I was selective about.

It’s not a very cohesive collection.

I was a gung-ho collector, but not choosy.  I would add any button I could get my hands on. When I announced this fact to my strident, hippy camp counselor Judy, she tested me: “Really? What if the button says ‘YAY, NUKES’?”

Hippy, please. I had my button collection dangling from my bunk, so my clear stance on nukes was right in her face.

Which brings us to the first category:

Actually, my position wasn’t so much anti-nukes as it was pro-buttons. And I probably would’ve pinned a YAY NUKES button next to these. But still…how could she doubt my principles about power plants? 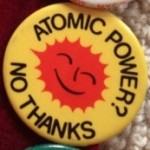 The pro-choice and Big Bird are so Election 2012. Why did I have them at age 11? Too young to vote or “choose,” too old for Sesame Street. And definitely not yet an uppity woman, whatever that was. But hey, a button was a button. Plus, I probably thought “pro-choice” meant “in favor of choosing sundae toppings.” “GO FLY A KITE”  is something Wally Cleaver would’ve said when he was really pissed off at Eddie Haskell. I probably thought “what keeps your ears apart” was LOL hilarious. And “Basingstoke” was a code word between my great-aunt and -uncle. To them, it meant “shut up.” I don’t know what it meant to anyone else, but to me, it was a “shut up” button. Sassy!

This was the age of Sandra Boynton and her moody, gluttonous hippos. It seems arbitrary that hippos were pegged as chocolate fiends. Maybe the hippo was supposed to symbolize pre-menstrual woman, in which case these buttons were over my head. I parroted any political views of my parents’: “Boo Nixon,” “Yay Carter,” “Boo Reagan.” Of course, “Boo Reagan” was a more informed opinion since by the time he ran for his second term (and beat Mondale-Ferraro), I was 15. And, apparently, still collecting buttons.

I know I loved the word play of the Nixon and Kennedy/ Carter buttons. Hee hee! “Jail to the Chief” is a play on “Hail to the Chief”! And “ass” means “butt,” but also means “donkey,” the symbol of the Democratic Party. Get it?  And yes, Ted Kennedy tried to beat Carter for the nomination when Carter ran for reelection in 1980. Ballsy. I hated cats, for no other reason than that my mother hated cats. I did not think they deserved love, and even back then I knew what “pussy” meant, so I cringed at the word “pussycat.” But it was another button, and its shape was rad.

Now, I didn’t hate music, but beyond listening to my “Pass the Dutchie” 45 album over and over, I was pretty neutral about it. I quit piano lessons, and I only went to the record store to play video games.  Also, I wasn’t a big hug seeker. So I had no business with “I’M A HANDFUL, GRAB ME,” which implies a love for both guitar chords and cuddles. Starting in about 7th grade, there was a preppy backlash, accompanied by pressure to go “punk.”  Punk was: safety pins on your jeans, and anything you bought from Flip, Canal Jeans and Unique downtown, or Pandemonium uptown.
I learned to take the subway just so I could get to vintage stores Canal Jeans and Unique, where I bought lots of  mistakes that I couldn’t figure out how to wear, and Flip, where, everyone knew, the Stray Cats got their leather pants. I never found  anything there, but I always went in and tried.
I got the most wear out of my Pandemonium clothes. They had their own line of punk-ish cotton separates, which, thanks to their neighbor Citarella, all smelled like fish until you washed them. Lacking follow-through on my mission to be punk, I mostly defaulted to Bennetton sweater vests, which were about as preppy as you could get. I wore them with Ralph Lauren bermuda shorts. Probably the most personal element of my button collection is the bag. I’d throw it out, but it reminds me of old times. And maybe it’s worth money.

Are you hoard-y? What can’t you bear to get rid of? Do you think Pussycats need love, too?

UPDATE: My friend Bruce wanted to post his excellent button collection in the comments, but couldn’t. So I’ve given them their own Talking Shrimp page, here: Bruce’s Buttons