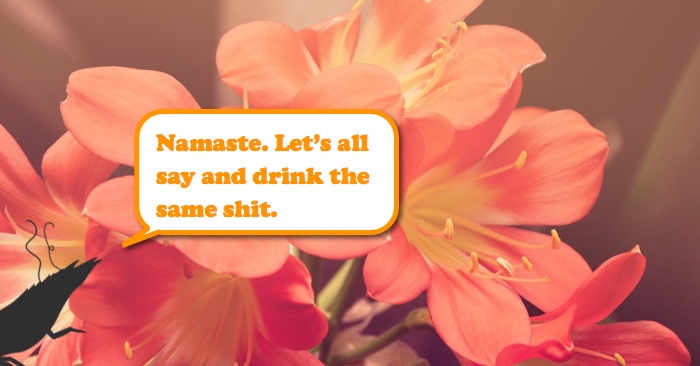 I don’t mean where someone shaves their head and gives their money to a charismatic leader and has sex with him every night until a parent comes to pick them up and finds them in filthy clothes and malnourished from eating nothing but carrots, the one crop grown on the cult property. I have nothing against that kind of cult-y behavior.

I’m talking about where people dive into a joiner-type subculture and parrot each other to death.

When I was steeped in the salsa dance world, it drove me nuts that people who didn’t know a word of Spanish would yell “WEPA!” (pronounced “way-pa”) on the dance floor. Urban Dictionary defines wepa as “a word of jubilation that is uttered by mainly Hispanics, especially within the Puerto Rican community.” And the people yelling it were doing so in the exact same Pointdexter-robot-dork “hello I am joyfully fitting in” spirit as that definition.

When I was briefly in an actual cult — not a dirty-clothes-and-sex-with-the-leader kind of cult, but an “if you stop coming every Monday it means you’ve lost your passion for life”-type situation, which I only joined because I thought it’d help me figure out my career — instead of saying “I’m happy,” or “I’m feeling great,” everyone would say “I feel well in myself.” And instead of saying “I hope I didn’t offend you,” they’d all say “I hope you didn’t offend yourself with what I said.” I decided to leave before I started saying those things, and before I had to give one more hug to someone who made a pervy “mmmm” noise during the hug.

These days, I have a foot in the online entrepreneur world, and I listen to a lot of the podcasts those people put out.

They all talk about the same stuff: using your fear as rocket fuel for success, getting out of your comfort zone, daring to be vulnerable, racking up failures because the only true failure is not trying, blah blah blah.

Why do I listen if they bug me so much? Because I like being bugged. I find it inspiring.

Being bugged is my rocket fuel.

The part that bugs (or fuels) me most is that they all insist on mentioning tea. Every single one of them makes sure to tell us that they don’t drink coffee, they drink tea. And they like to say, “I’m all jacked up on tea right now.” Or, “My husband/ wife/ homeschooled child / unschooled child just brought me my tea” or “We might get interrupted shortly by the tea kettle.” Because that highlights to us that they work from their cozy home.

They also like to tell us what kind of tea it is. “You’re listening to the Make Multiple Income Streams Fearlessly and Easily Online Podcast, and I’m ready to go with today’s guest — who earns millions each day from his laptop on a beach — and, my steaming mug of Laughing Empowered Coyote Zinger tea. It’s got quite a kick.”

WHO THE F CARES, AND WHY CAN’T ANY OF YOU DRINK COFFEE??

You ever get deep into some culture where everyone does and says the same weird shit?

Ever shave your head and join a cult?

What bugs you today?