The Diddler is back.

No, The Diddler is not a Batman villain.  It’s our nickname for the guy who plants himself outside our window a couple of times a day to have a smoke and jerk his fly up and down.

Once or twice, I’m pretty sure he’s actually whipped out his thang and jerked that up and down, too. But usually, it’s an empty gesture, accompanied by a stream of obscenities.

I can’t hear what he’s saying, but I know it’s obscene because I hear his choice language when I pass him in front of the deli.

(If you regularly get your quinoa bowl on at Hu Kitchen, you’re probably acquainted with him. Maybe he’s even called you the F—- word. Not for eating quinoa, just for walking by.)

The Diddler goes away for long bouts of time, during which I assume he’s doing time. Or, Steven and I have another theory — that when he’s on his meds, he goes back to his family in their park-facing prewar on 5th Avenue, and his job in wealth management — where, instead of a sweatshirt with a pregnant-looking plastic bag of who-knows-what underneath, he wears a Jill Sander suit.

Less likely, but who knows.

So, we’ve seen lots of the Diddler lately, because of something right beneath our window.

There’s a hole. And he’s obsessed with it.

It had a pole in it (poles in holes – you just know I’m going to get a whole new flood of google search traffic here now). The pole was there to keep people from falling in, but the Diddler came along and took the pole out so he could properly talk to the hole. And, throw things in it. It’s also become his own giant ash tray. He’s not the only one attracted to the hole.

Every five minutes, someone else stops by to look in the hole. Some take pictures. Couples approach and peer in together, like it was on Time Out’s list of “Spring Must See’s” in NYC. 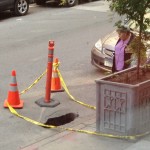 What do they think is in there?

A family of mole people?

A trip to Acapulco?

No, they know it’s None Of The Above.  But they can’t help looking anyway. Must. Look. In. Hole.

Remind you of anything?

If you said, “Those Upworthy headlines,” you’re right here with me.  God, they annoy me:

“This boy took a sandwich out of his lunchbox at school. What happened next will blow your mind.”

Or “I thought this was an album of kitten photos. But when I got to the third picture, my jaw dropped and I suffered a paralyzing stroke which left me drooling for life.”

Enough, already. That’s what I say. And then I click anyway.

Curiosity is so powerful. You know that. You read this far to find out:

“How can a hole get me more attention?”

The answer? Curiosity.  Curiosity is your hole. It’s how you make them look. I’m really talking about in your business, specifically in your copywriting.

After all, you naturally know how to use curiosity to get attention in life.

You do it when you say, “Guess what?” And the other person has to ask, “What?”

You do it when you say, “Ew. Smell this sponge.”

But do you do it enough in your email subject lines, your headlines, your storytelling? Do you give them a “hole” that people can’t not look at?

This curiosity factor might be a “no duh,” but there are 3 specific reasons I’m bringing it up.

(And, by the way, saying “there are reasons” creates a little Curiosity Hole (™ ) right there. You want to know the reasons, right?)

Reason 1) You might think it’s been done to death, and you want to be original.

Do it anyway. It has been done to death, but we’ll still click. Even if we’re thinking we’ll probably be disappointed.

Reason 2) I want you to do it right. Before they work with me, I see a lot of my copywriting clients attempt the Curiosity Hole in their headlines, but they miss the mark by telling the whole story right in that one line.

Example: “Why The Wrong Diet For Your Body Will Backfire And Keep You Fat.”  (Ooh, you’ve got me by the lapels!)

Yes. But they’ll open it. Admit it: you’ve clicked more than once on those “4 foods you must stop eating to lose belly fat” ads. (“Huh? I can’t have bananas??“) If, unlike those, you have something useful to say that can support your Curiosity Hole, go for it.

Reason 3) For the first time in years, I looked this week at my free Non-Sucky Copy Tips. I was nervous. Were they still any good? Actually, they’re amazing. I was like, “damn, that’s some brilliant, useful shit.” But I caught two things that make them embarrassingly “2009.”

Because I don’t know how to change a pdf, there’s only one way to make my freebie current: Bring back Balloon Boy (on it — seeing if he’ll get back in the balloon) and give you a copy tip.

Here it is: put a good “hole” in your copy, and people will pay attention. So now to you.

Tell me in the comments: Do you look in holes? Do you click on those headlines even if it’s just to prove to yourself there’s nothing there to see?

Should I open a bar called The Curiosity Hole?

And, if you write copy for your business, do you use a Curiosity Hole to get attention? Give me examples. I love them.

Want to get more attention with your copy? I can help. Check out my new Quickie Copy Rescue service on my “hire me” page.  Click here to go there now.